You have probably heard of Windows Subsystem for Linux or WSL, this is a feature that you can enable in Windows 10 to natively run Linux command, and application on your Windows machine without running in a separate virtual machine.

and more, just search for Linux in the Microsoft public Store

I choose to install openSUSE, and wanted to see if it was possible to run a desktop environment as well.

There is a free and open-source desktop environment for Linux and Unix called Xfce, if you heard of GNOME it is similar to this (but Xfce is not GNOME fork)

How do you get all this going then? Well first enable Windows  Subsystem for Linux

Choose to install you favorite Linux distribution from Microsoft Store, my choice this time is ubuntu, but I have tested the same with Kali Linux.

What for the installation and launch the Linux prompt, search for ubuntu in the start menu.

First make sure to update your Linux installation, with these commands

Now time to install wget to download Xfce, may not be needed on some distributions

Now time to download and install Xfce, goodies (optional), and start the service 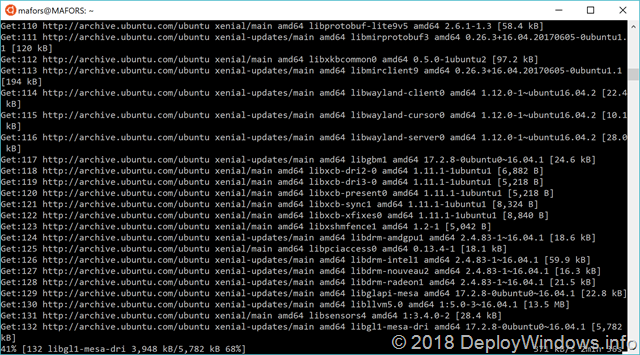 If you are running For Kali Linux, these are the commands

OK done! How do you connect to the Linux desktop? Run Remote Desktop Connection, mstsc.exe

What is your best tips with Linux on Windows 10? Share it in the comments, and Have fun!

Join 788 other followers
Follow DeployWindows on WordPress.com
My Tweets