The WinSxS folder (also called component store) also hold all components in the operating system. WinSxS folder is steadily increasing in size, one cause of this is Windows Updates. The WinSxS folder will make is for example possible for you to uninstall an update. Also each component file (including name, version, language…) is stored only once in the system, if you notice other files/instances they would only be hard links to protect and save space.

So can this folder be reduced in size? Generally speaking no don’t use any 3rd party application/clean up tool for this, it will probably look safe, but there are reasons why we store these files here one is reliability reasons another is the ability to update or configure optional components (there are more). There are also some ways to clean up after a Service Pack, ex SP1 for Windows Vista there was a binary called VSP1CLN.EXE that would help you permanently delete old files. Or DISM to remove Windows 7 Service Pack 1

But there are Breaking News! October 8 an update was released to make it possible to clean up the component store! This is how it looks like before and after I deployed the patch 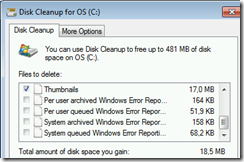 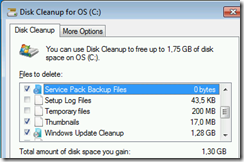 Note: If nothing is found for Windows Update Cleanup to perform, it will not show up as an option

How to deploy, configure and automate this: http://blogs.technet.com/b/askpfeplat/archive/2013/10/08/breaking-news-reduce-the-size-of-the-winsxs-directory-and-free-up-disk-space-with-a-new-update-for-windows-7-sp1-clients.aspx

So while talking about WinSxS I have to mention there have been a lot of updates in Windows 8.1. Have a look here who to handle the component store: http://technet.microsoft.com/en-us/library/dn251569.aspx